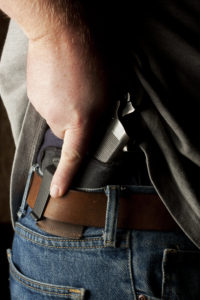 Did you know you have lost your gun rights in Alabama if you have been convicted of a Domestic Violence Misdemeanor? Has your pistol permit application or firearm purchase been denied in Alabama? Have you previously been convicted of a Domestic Violence, 3rd degree (misdemeanor) in Alabama? If you have been found guilty or plead guilty to a Domestic Violence misdemeanor or any state felony in Alabama, did you know that not only are you unable to be granted a pistol permit by your Sheriff, you are also prohibited under Alabama and Federal criminal law from possessing or owning a firearm. This includes Domestic Violence misdemeanor convictions in any Municipal or District Court in Alabama. The good news is, if this is your only firearm disability ground, there is a process to seek a restoration of your gun rights under Alabama and Federal law by obtaining a Full Pardon by the proper jurisdiction in Alabama.

Persons who have been convicted in any court of a qualifying Misdemeanor Crime of Domestic Violence (including, but not limited to, Domestic Violence, 3rd degree in Alabama) generally are prohibited in the State of Alabama from owning or possessing any firearm (See: 13A-11-72(a), Code of Ala.). Violations of this offense are punishable as a Class C Felony in Alabama (See: 13A-11-84(a), Code of Ala.)

KNOW YOUR RIGHTS: Defenses and Exceptions – A person has NOT been convicted of a qualifying Misdemeanor Crime of Domestic Violence IF:

2)     The person was entitled to a jury trial AND the case was not tried by a jury – unless the person knowingly and intelligently waived the right to trial by jury, or

3)      The conviction was set aside or EXPUNGED; the person was PARDONED; or, the person’s civil rights were restored (if the law of the jurisdiction provides for the for the loss of civil rights under such an offense). CAUTION: This exception does not lift the Federal firearms prohibition if:

-the expungement, pardon or restoration of civil rights expressly provides that the person may not ship, transport, possess, or receive firearms; or

-the person is otherwise prohibited under by the law of the jurisdiction in which the proceedings were held from receiving or possessing any firearms.

A qualifying Misdemeanor Crime of Domestic Violence is any offense that:

2)      Has the element of the use or attempted use of physical force, or the threatened use of a deadly weapon; and

-A current or former spouse, parent or guardian of the victim;

-A person with whom the victim shared a child in common;

-A person who was cohabiting with or had cohabited with the victim as a spouse, parent, guardian, or

-A person who was or had been similarly situated to a spouse, parent, or guardian of the victim.

Alabama Gun Rights Restoration Attorney, Jordan M. Copeland, represents clients throughout Alabama in the Pardon Application and Hearing process with the Board of Pardons and Paroles. A Full Pardon can restore certain rights including gun rights and vacates the conviction. If you have lost your gun rights and want to seek representation for a pardon to have your rights restored, contact Alabama Pardon and Gun Rights Restoration Attorney, Jordan M. Copeland for a consultation. Office phone (256) 378-6087 or (205) 924-3839 or email jordan@expungementalabamalawyer.com